Tango in the Theater

In the years 1902-3, the Argentinian magazine Caras y Caretas published a weekly column called “Photographic Strolls through Town”. As the title suggests, the articles featured photographs taken in Buenos Aires. The subject matter varied from week to week: characters and personages of the city, sites of streets and buildings in bad repair, accidents, curiosities, etc., were the usual topics. The articles were signed by Sargento Pita (“Sergeant Whistles”), a pseudonym most likely used by the director of the magazine, José Álvarez (also: “Fray Mocho”).

One of the articles stands out, however, not only inasmuch as it is one of the first full-length essays dedicated to tango, but also because it includes photographic illustrations of actual tango dancers.

It is barely a citizen of Buenos Aires, and it has not been able to get used to its surroundings; just like its predecessor, the milonga, has found it difficult to feel at home under the roofs of country farms, where the criollo guitar humors the distant memory of the Andalusian land.

The gato and the pericón here in the pampa, and the cueca in the mountains, were persistent in defending the grace and finesse that their noble pristine cradle had bestowed on them. And the voluptuous and lascivious caress, with which the African candombe wanted to bastardize the country dances, did not find a favorable atmosphere outside of the perigundín and the academia [de baile]. 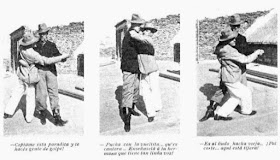 The measured and somnolent habaneras conquered easily the idle compadrito who already took pleasure in the slick shaking of the milonga and, this and the former becoming one, engendered the plebeian tango, whose first steps are practiced today in the alley of the tenement houses by some humdrum couples of bored loafers to the sound of the barrel organ—like an imitation of other times.

These [dancers] are not those picturesque figures of the classic hall of the regional dance, where reigned supreme the corte and quebrada and the charming comadrita of the dagger in the garter—which participated just as easily in a row as in a lovers' quarrel or in a conspiracy.

The memory of tango has been saved due to the Podestá's, who preserve it. But the figure of the quarrelsome compadre who used to dance it has been lost forever. His fading shadow is barely evoked by the few survivors of some bloody drama of that time.

The characters of Alto and Balvanera have disappeared: with their country trousers, poncho on the shoulder, insolence readily on their lips (the inseparable companion of the telltale dagger), and the pointed heel, which inhibited the step and, while seeking to keep their balance, resulted in a feminine swaying of the hips! 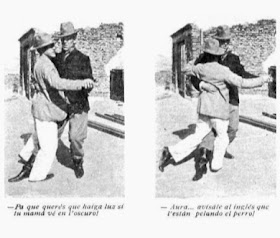 Today it is no longer a faction banner, as in the days of the followers of Mitre and Alsina, but the simple street entertainment of an idle group of friends. And if we are not already attending at its inconspicuous demise, we hear the funeral tolled by the bell announcing its death throes.

Nevertheless, perhaps it is not dying. Gratifying to those who know about cortes and hamacadas, news reaches us from Europe that the tango of the yankees, which is ours translated into English and imported by the Americans under the name of “cake-walk”, is all the rage at the soirées of the Parisian aristocracy.

Who knows if the Podestá's have not been requested to carry the traditional dance of our compadritos to France, which they have saved at the expense of so much sacrifice; and with it some of these nightfall street dancers that today the police tends to pick up, classifying them as layabouts and badly occupied?

Are we ever going to see again the flourishing of the red carnations that chastised the cheek, the pointy and delicate little steps, and the quebrada that swept the floor with the ear?

The criollo compadrito and the criollized Italian of La Boca were the famous cultivators of tango, but the one and the other with their special attire have disappeared from the scene. And in order to revive it today, one will have to reconstruct scenes from other times, being content with rough outlines and passing over interesting and picturesque details.

In recent days, the article has been viewed as an early instance of a tango history (Hugo Lamas, Enrique Binda: El Tango en la Sociedad Porteña, 1880-1920, 1998). As such, it has been evaluated rather critically by the authors. In fact, it is difficult at times to grasp the meaning of the text, which deals with historic developments rather offhandedly. Interestingly, it contains many elements of lore and legend that were later written up in more formal histories of tango. The pictures themselves—a male couple dancing tango—allude to the (unsupported) idea that tango was originally danced only by men. That the “plebeian” tango, influenced by the “slick” milonga and “somnolent” habanera, was created by lazy lower class rogues of the suburbs whose dances frequently ended in quarrels and fights at knifepoint has also become part of tango's “mythical” history. However, it is typical—of this essay as well as of later tango histories—that all these occurrences took place in an unspecified past that the author does not claim to have actually witnessed or can pinpoint more precisely.

But perhaps one should not expect from the text what it does not promise to provide. The article stakes no claim on historiography. “Sergeant Whistles” points out conditions and deficits in Buenos Aires in 1903, and that also with an ironic wink.

As part of a regular column that appeared in Caras y Caretas, the pictures are presented in a way that suggests they were taken by chance. There is reason to believe, however, that this was not the case as they seem to belong to an incomplete series, as can be inferred by looking at another issue of the same magazine. Six months after this article appeared, the piano score of El Maco, a tango by Miguel Tornquist, was reprinted in Caras y Caretas. (Tornquist, the Bohemian offspring of one of Buenos Aires' most distinguished families.) As illustrations, the score was accompanied by a set of six photographs depicting a man and a woman dancing tango. 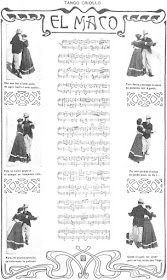 It is obvious that the two sets of photographs belong together. The “leader” is the same and, since he is wearing the same clothes, it can be assumed that the photographs of both sets were taken together. This notion is supported further by the fact that some of the poses are the same. 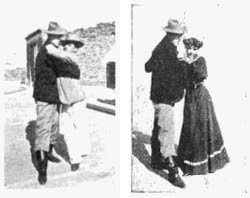 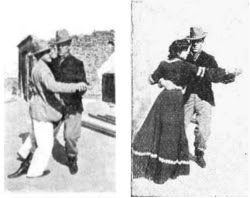 It appears likely, then, that the photographs published first were not snapshots taken by chance in Buenos Aires, as the article implies, but that both sets were taken together, independently of the fact that they appeared in different magazine issues.

The dancers were not identified by name, but Lamas and Binda stated—unfortunately without giving a source for their information—that one of the dancers (most likely the taller one appearing in both sets of pictures) was Arturo de Nava. This would establish a link to another name mentioned in the article: that of the Podestá's.

The Podestá brothers were a family of circus artists that had gained immense popularity for their performances of gaucho melodramas. At the end of the 19th century, they moved to the theater stage and, in order to cater to their urban audience, turned from gaucho melodramas to pieces that played in the neighborhoods and tenement housings surrounding Buenos Aires. This, of course, was the milieu of tango. Antonio Podestá is credited with having composed the first tango that was performed on stage, danced by his brother Pablo Podestà.

At the time the photographs were published, Arturo de Nava was a well-known singer, composer, and actor in the Podestá company. On stage, he frequently performed as a tango dancer. If it is he who appears in the pictures, he would probably have been recognized by many readers of Caras y Caretas. That he was not named, then, corresponds to the topic of the magazine column: shown are not two actors dancing tango, but two “ layabouts ... badly occupied” that “Sargeant Whistles” is calling to order.

The article was published in February 1903, just before the end of carnival season, the highpoint of the yearly dance season. The most important public dances took place in the theaters, including the Apolo where the Podestá's and Arturo de Nava performed.

Tango having been introduced to the theater stage, it also became a popular dance with the audience. Caras y Caretas did not publish a description of the carnival dances of 1903. In the following year, however, the magazine included the following report:

...
The cake-walk—this dance, in which some claim to see the symbol of the struggle for life—has been the clou of the dances at the Opera. It was danced in all forms from the one most correct to the greatest exaggerations, in between lively laughter and clamorous applause. The yankee dance prevailed to such an extent that even the tangos were danced in cake-walk style.

Second place belongs, as always, to the dances at the Politeama where an enormous audience, ready to enjoy itself within the limits of reason, spent pleasant evenings between appropriate jokes, scintillating and harmless pranks and an abundance of tangos. Among the popular theaters, the Apolo has been the one most favored by the criollo constituent. There, tango with corte and quebrada has been predominant, some truly remarkable couples showing themselves and eliciting enthusiastic applauses from the audience in the boxes...

At the Marconi, Apolo, Victoria, and the Nacional one also danced enthusiastically, the crowd of dancers growing so large that there were moments where one could not move from the very spot.
...

It seems safe to suggest that the introduction of tango to the theater stage was instrumental in making it a popular dance with the general public. The mythical tango of the old days was dead, as the article claimed, but it was remembered on stage and passed on to an increasingly enthusiastic audience through the Podestá. Was the fact that “Sergeant Whistles” picked up a well-known actor as tango-dancing layabout a sign of executive overeagerness?